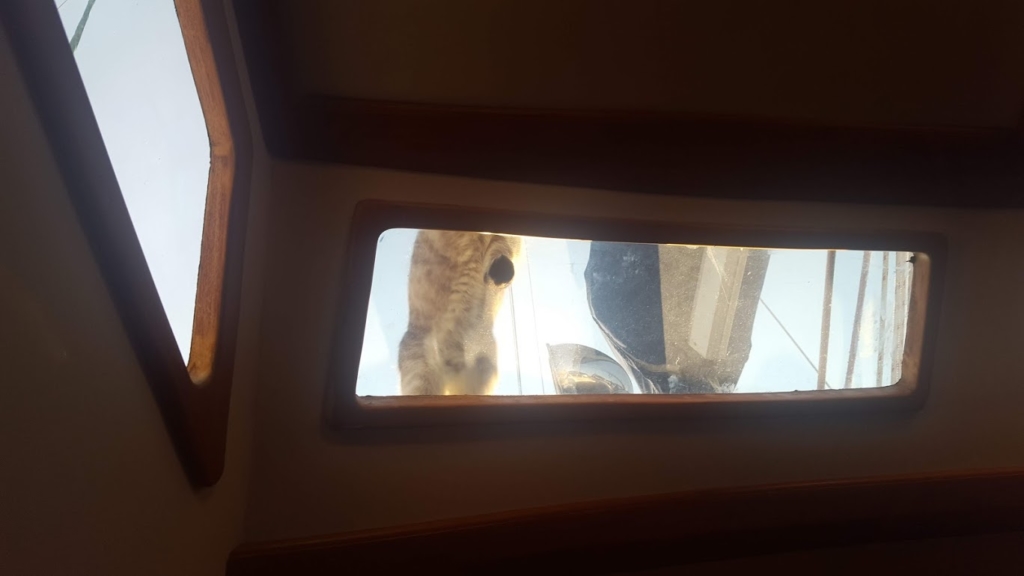 When I first moved onto a boat, I thought having a pet on the boat would be so romantic. A sweet boat cat who miraculously did not shed and knew how to use the toilet sounded so cozy! Reality set in (a.k.a. I remembered cat hair and cat pee), and we never did end up getting that boat cat.

Unfortunately, we found ourselves with boat creatures anyway. The Bay Area has been pounded by rain in the last two weeks. With these years of drought hanging over our head, I could not be more grateful. But that rain brought rats.

I was home alone and heard a light scratching behind one of our walls, near the refrigerator and starter battery. I investigated the fridge and the trash can, but found nothing that could be making the noise. It stopped, so I assumed it was just the trash settling and went back to reading.

A few hours later, Charles and I were in the main cabin when we heard the scratching again. We investigated together, opening up the space more, but we found nothing. And once again, the noise stopped while we were over there. I was concerned that the rain could have gotten into the battery box and the noise was frying cables, so we checked it out and found nothing.

The next time we heard the noise, the following morning, I was positive we had an animal on board – either a rat or a mouse. We figured he was trying to get into the refrigerator. So, we opened up our access to the aft cabin below the bunk, under the sink, and under the stove.

We saw scratched off insulation, which was our first confirmation that we had an animal. A few moments later, we started to see the rat poop. By the size of the droppings (approximately pumpkin seeds), we reasoned that we had a rat.

So, we hopped onto Google to read about rats on boats. After a short time of terrifying research (“one rat did $10,000 worth of damage to my boat”, “insurance will not pay out for rat damage”, etc.), we were all hands on deck to get rid of the rat. Same day, we bought small animal poison and a sticky trap. We set out the poison and the sticky trap near the greatest concentration of droppings, and waited.

The next morning, we opened up the aft cabin to inspect – the poison was gone, and the sticky trap was empty but dragged about 11 inches from its original location. Ugh – this meant that we were likely dealing with a bigger rat than we had hoped.

We called a rat expert, who gave us some great information about rats. 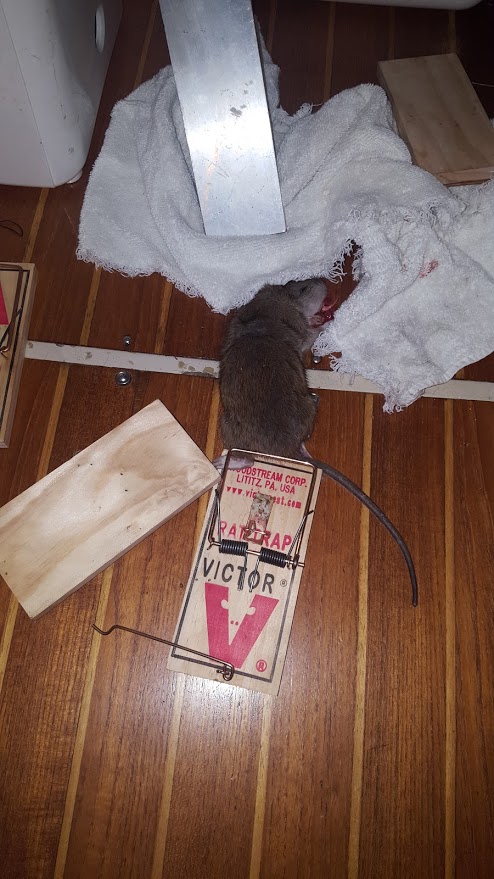 The first night, we baited with peanut butter. The next morning, nothing. So, we re-baited with goat cheese, and decided to leave the underside undisturbed for two nights, to make sure the rat was not just avoiding us and (therefore the traps).

After two nights, we saw that one of the traps was snapped, but there was nothing in it. We resignedly removed the traps for the aft cabin, leaving one in the cubby on deck and one under the galley sink, where there was the second highest concentration of feces.

We had not heard any scratching for days, so I went to sleep that night hopeful that the rat had just decided to leave, since he was not getting any food and we kept poking into his hiding place.

Unfortunately, at 5 a.m., Charles and I both awoke – silently, but with a start. We both listened intently, without turning on a light. There was a new noise – not just scratching, but a wheezing, almost a whimpering.

We communicated nearly silently that we both knew it was the rat, and he was in the main cabin. We listened, then each indicated where in the cabin we thought he was. We agreed on the back passage, fortunately cluttered at that moment, where he seemed to be rustling around.

Charles crept out of bed; I stayed put. He grabbed a water bottle and then, realizing it was a terrible weapon, grabbed his butane torch. He snuck to where the noise was coming from, and then blasted it in the direction of the noise! It illuminated the rat, which squealed and ran towards the front of the boat – and me. Charles yelled “it’s huge” and jumped onto the cushions. It was under our smaller table, so we trapped it in their and laid traps all around it, then scared him out. We were hoping he was going to get snapped in a trap and it would be over, but instead this massive rat runs right over the trap. It snaps on him, and he just shrugs it off – it was like watching an aggressive linebacker.

We didn’t get a chance to officially measure until later, but this rat was enormous. The creature’s body was 10 inches long, and it had a 4 inch tail! The rat trap it is next to is 8 inches long.

So it runs out, clears the trap, and heads straight for me, in bed. It’s directly under me, less than 2 feet away. I tell Charles to build a fort to trap him in there, while I grabbed Charles’ work bag that the rat was trying to get into. Charles grabbed my sewing straight edge, which is metal and like 5.5 feet long. He set out a few more traps, just in case we got lucky. When we were ready, I grabbed a water bottle off the nightstand to scare him back towards Charles.

The rat took off running, and Charles managed to pin him with the straight edge! It was like a javelin motion. The creature made a horrible noise, and then stopped moving. I had just enough time to take a breath, and take a picture, before Charles said “oh my god I think HE’S FAKING”. Right then, the rat went totally wild. Charles kept the straight edge pinning his body, then dragged his head into a rat trap. But he was still struggling, so I pushed another one onto his back legs to make sure he didn’t escape. Then I held him down while Charles went to get a towel and a hammer. We put the towel over his head, and then Charles hammered him to death.

It was so horribly intense – we were both completely traumatized. And then we had to clean up his guts, and his stupid rat droppings all over the place, and his blood… Ugh. Not to mention the massive feeling of guilt for killing an animal. It was just super intense.