Finishing the Refit and Starting to Cruise

Finishing the Refit and Starting to Cruise

“The hardest thing is leaving the dock” or “oh, don’t rush to start” – whenever someone on the dock stopped to chat as we were finishing our refit, they gave us one of those two perspectives. But after two years (and 18 months longer than we ever expected our repower to take), we were ready to say our goodbyes.

Refitting and Outfitting in Alameda

By late November 2021, our replacement electrician and Charles had the batteries installed and secured, and enough components of the power system sorted for us to move the boat to Alameda and get longer hours out of him.

The trip to Alameda was so cathartic – Ayala had not moved outside the Berkeley Marina since the end of 2019. On good days during those intervening years, we could tell ourselves it was just around the corner. On bad days, there was space for the quiet fear that Ayala would never move again.

But Ayala did move. We motor-sailed to Alameda, very light winded, testing our newly-functional motor and battery bank. 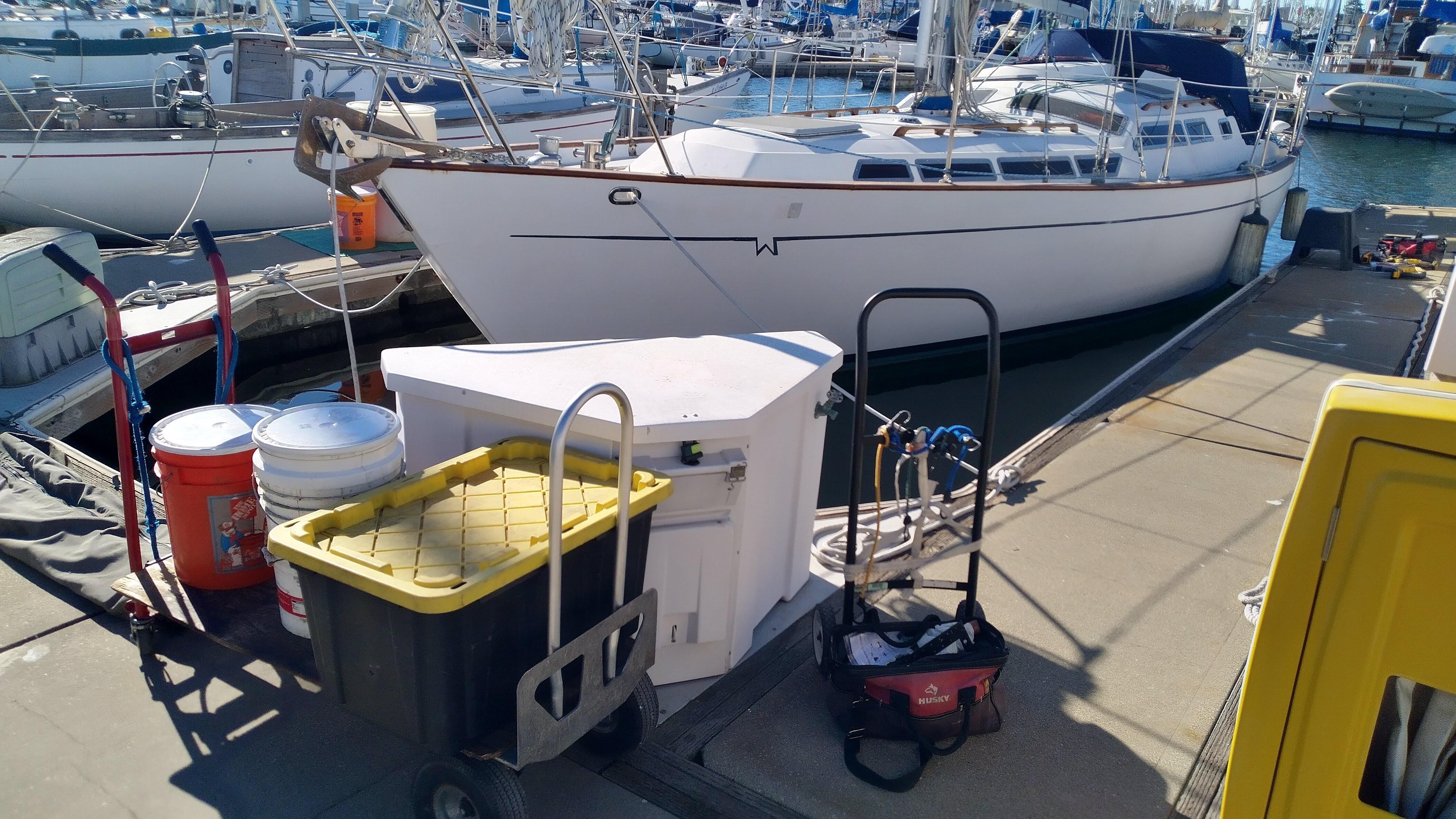 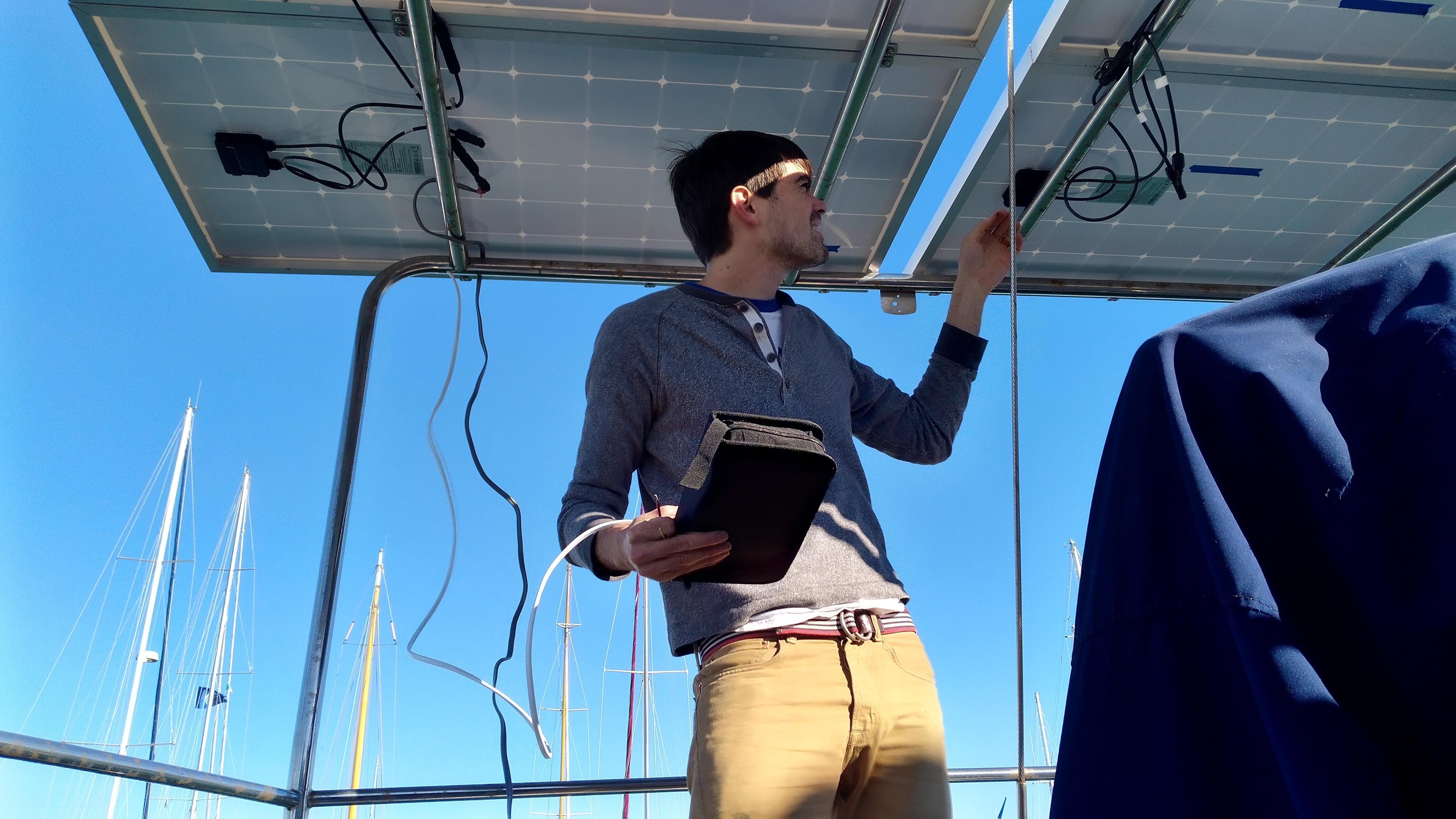 For the next few months, our primary focus was finishing the electrical system – getting our 12 and 48 volt power banks right, solar setup secure, inverter and shore power distribution finalized, good new outlets for our cooktop and convection oven installed, and getting our new monitoring devices installed and connected.

Whenever there were time between these projects, we were finishing the gimbal setup, organizing and storing tools, installing a secondary bilge pump, getting new lifelines and reefing lines, getting a new dinghy, and posting Sail La Vie for sale. After a few weeks, Sail La Vie (and our last tie to Berkeley Marina) was gone. After a few months, the electric install was complete – we were ready to run the motor, the generator, the inverter, and test all of our systems on the water.

Electrocuted at the Helm

Now that we were “good enough” to go, we waited for our weather window – because of course the offshore conditions started howling as soon as we were actually ready to leave. So we puttered through projects that would take no more than a day, so we could end each day ready to leave if the conditions shifted.

After a few weeks, and luckily while Charles’ father was in town, we got a weather window – leaving Alameda in an evening in early March, and ready to go to Pillar Point, Santa Cruz, or Moss Landing depending on our speed.

Provisioned, napped, and ready to leave, we switched on the motor to start reversing. At the helm, it feels natural to have a hand on the wheel and a hand on the binnacle guard.

The first moment, Charles just felt excited and thought to himself that the metal was particularly cold – but immediately afterwards realized he was being electrocuted.

Disappointed, we furiously disassembled and worked to isolate each component of this box, which had a surprising number of bad design decisions in what hot wires were touching other components. We got it safe enough with electrical tape, then had to move inside to replace a 200amp fuse that was blown by this process. 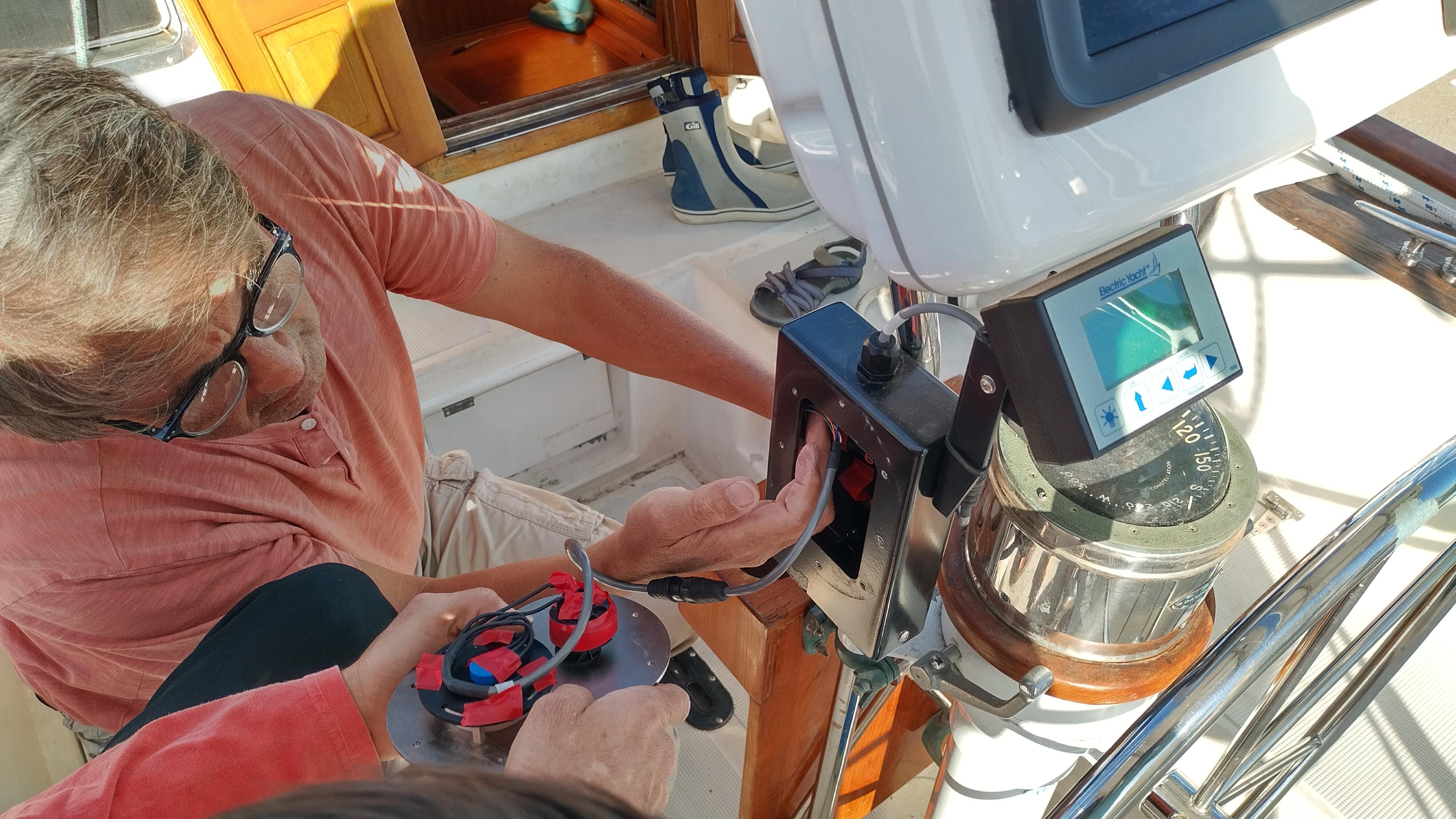 About an hour late, we were ready to leave, with the caveat that anybody on helm had to wear gloves just in case the electrical tape holding our system together failed. 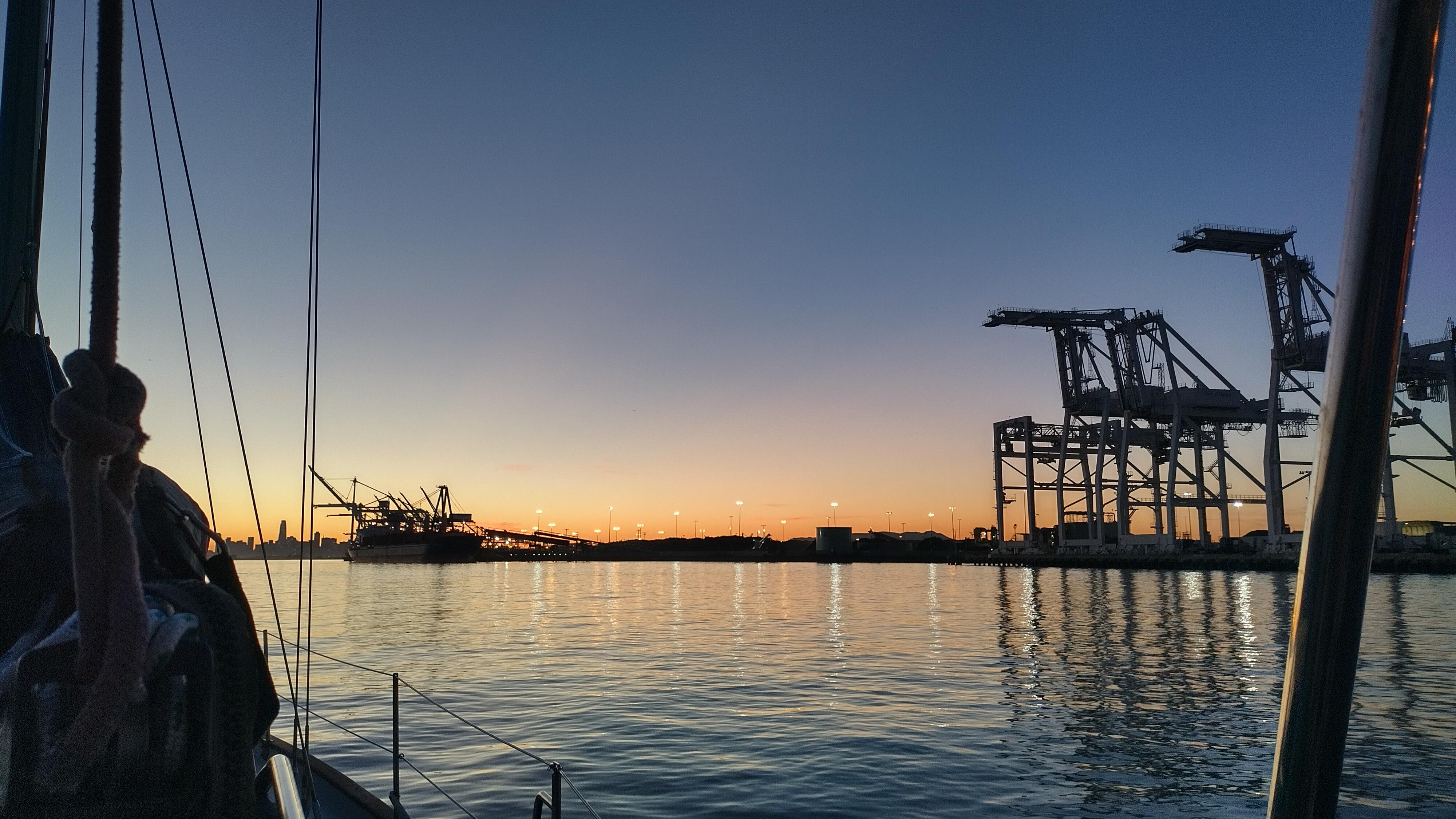 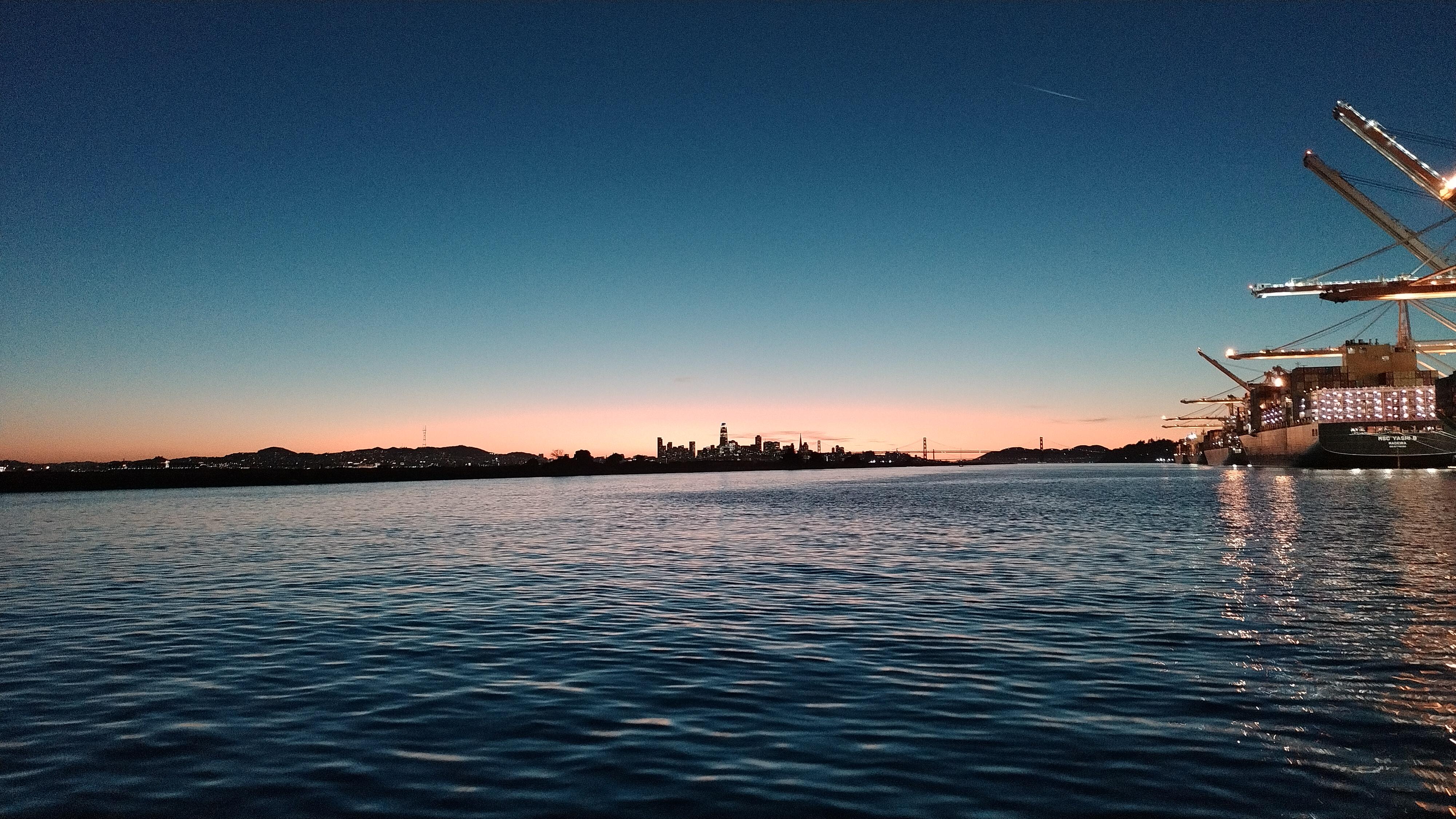 Caught on a Crab Pot

I had first watch, which took us from the Oakland/Alameda estuary to around Treasure Island; Peter took over for a largely uneventful shift through midnight, under the Golden Gate Bridge and started down the coast. Charles’ watch ran midnight to 4 a.m. We largely motor-sailed, as the predicted high winds never materialized. Around 3 a.m., we heard a dreadful noise from the motor/prop area – we had gotten tangled up on a crab pot off of Pillar Point.

Motor off, we were all hands on deck. I primarily sailed & kept course, while grabbing occasional tools. Charles and Peter tried to get us free. We removed significant lengths of line, then a buoy, but we could still see tailing line coming from our prop. After some time and creative retrieval methods, we got this line in hand, but no matter our angle or amount of pressure, we could not get it loose from the prop.

Fine. Not worth starting the motor again in case of further damage, we decided to sail and just get to Santa Cruz at a slower pace. We shut the motor off, Charles went to bed, and Peter and I traded watch and continuing to work the line. Around 5 a.m., the wind started to die. We raised the main sail, and kept creative with our approach, but several times found ourselves adrift in no wind whatsoever.

As the morning went on, I started to hear a roaring to which I was unaccustomed; Peter taught me that it was the sound of surf crashing on shore. We were getting closer than comfortable. 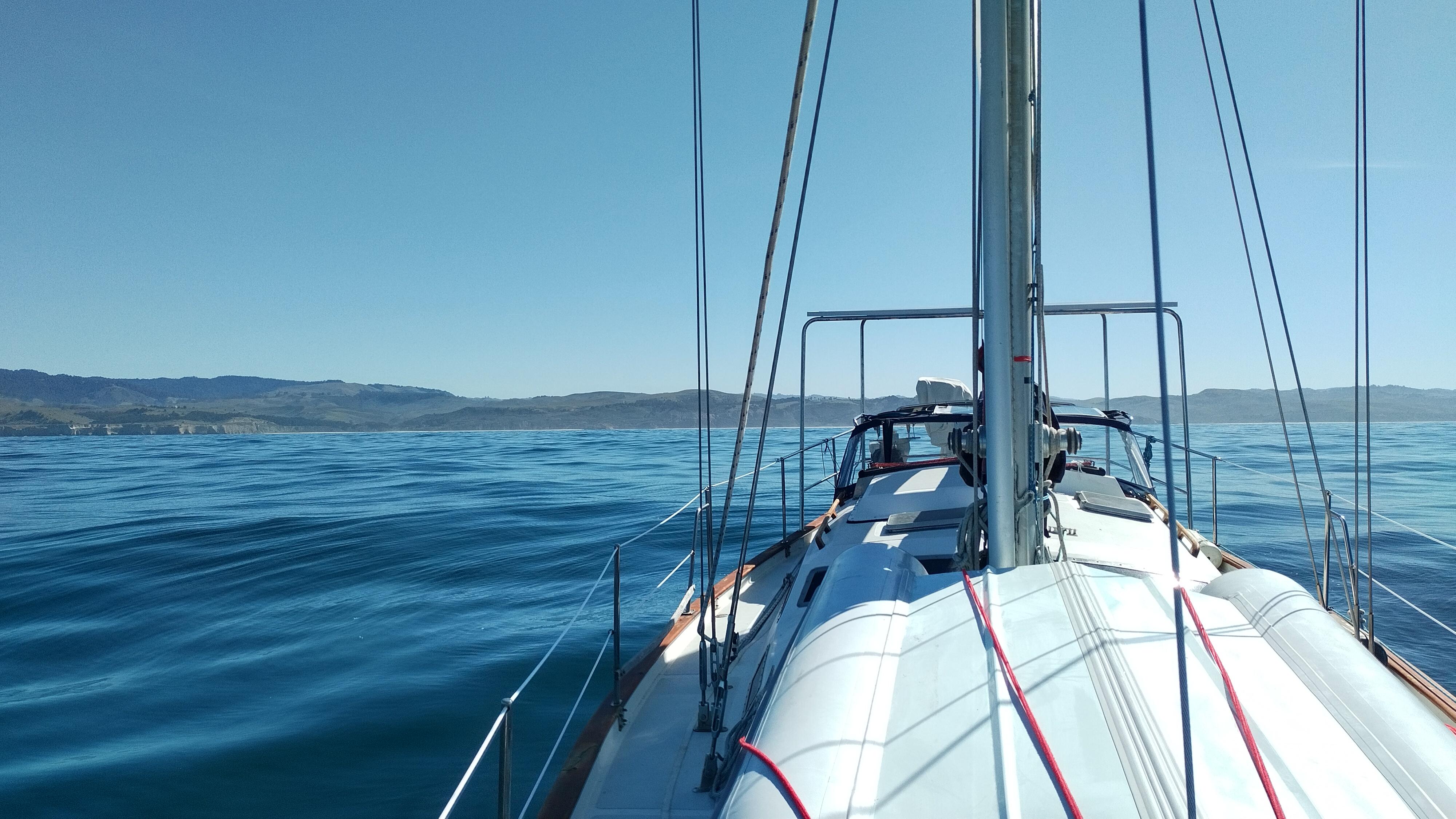 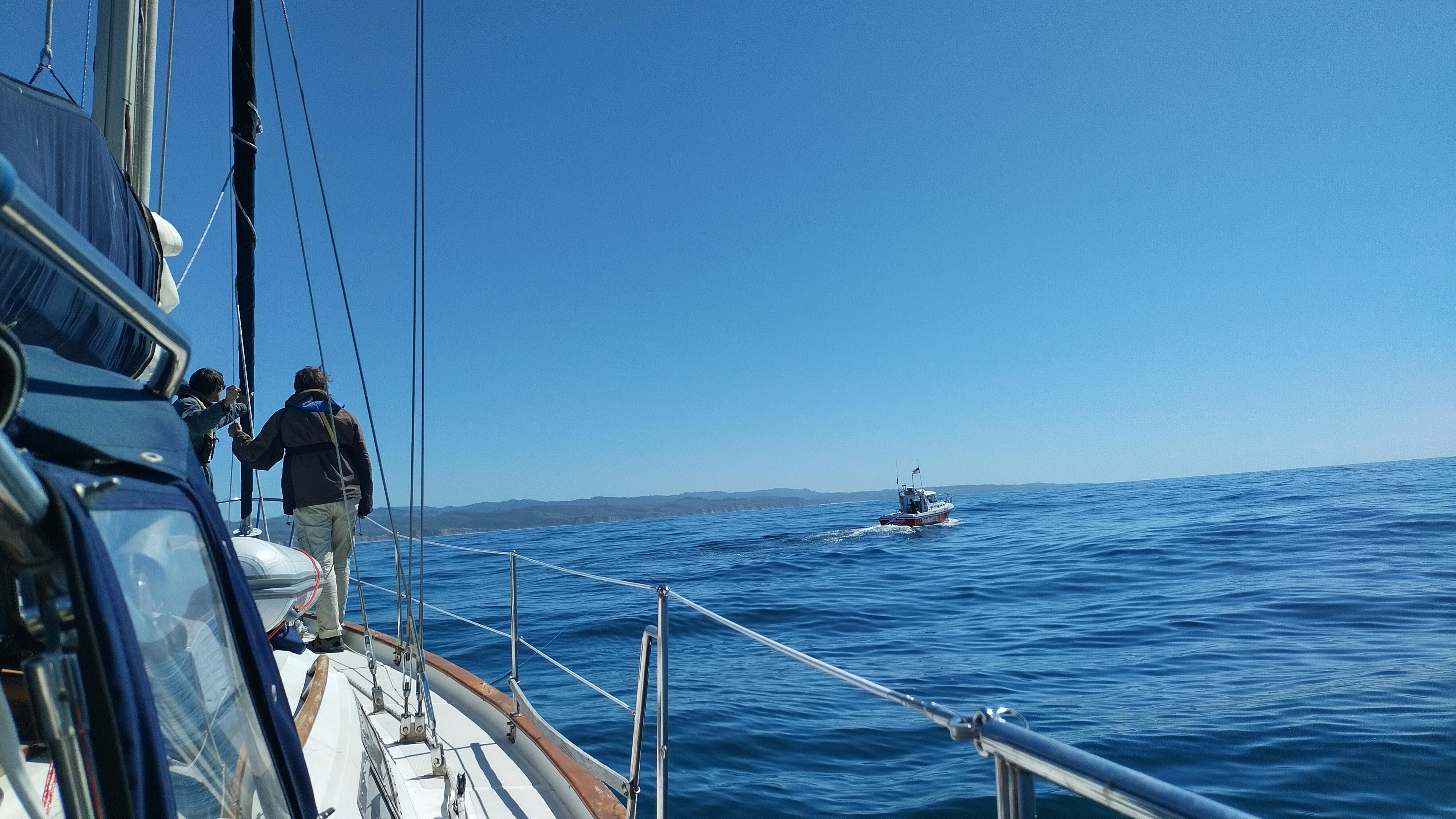 We called BoatUS for a tow – a far more lengthy and complicated process than I had hoped – which got us down to Santa Cruz just after dark. Our towboat crew was wonderful, with great radio alerts for whales, and they helped us get set up with the Santa Cruz boatyard for a first-thing in the morning haul-out the next day. It was a warm, fairly windless day, so as far as one can enjoy being towed, it was a beautiful day.

Hauled, Untangled, and On the Move

We got hauled in Santa Cruz the next morning, and we were downright knotted. 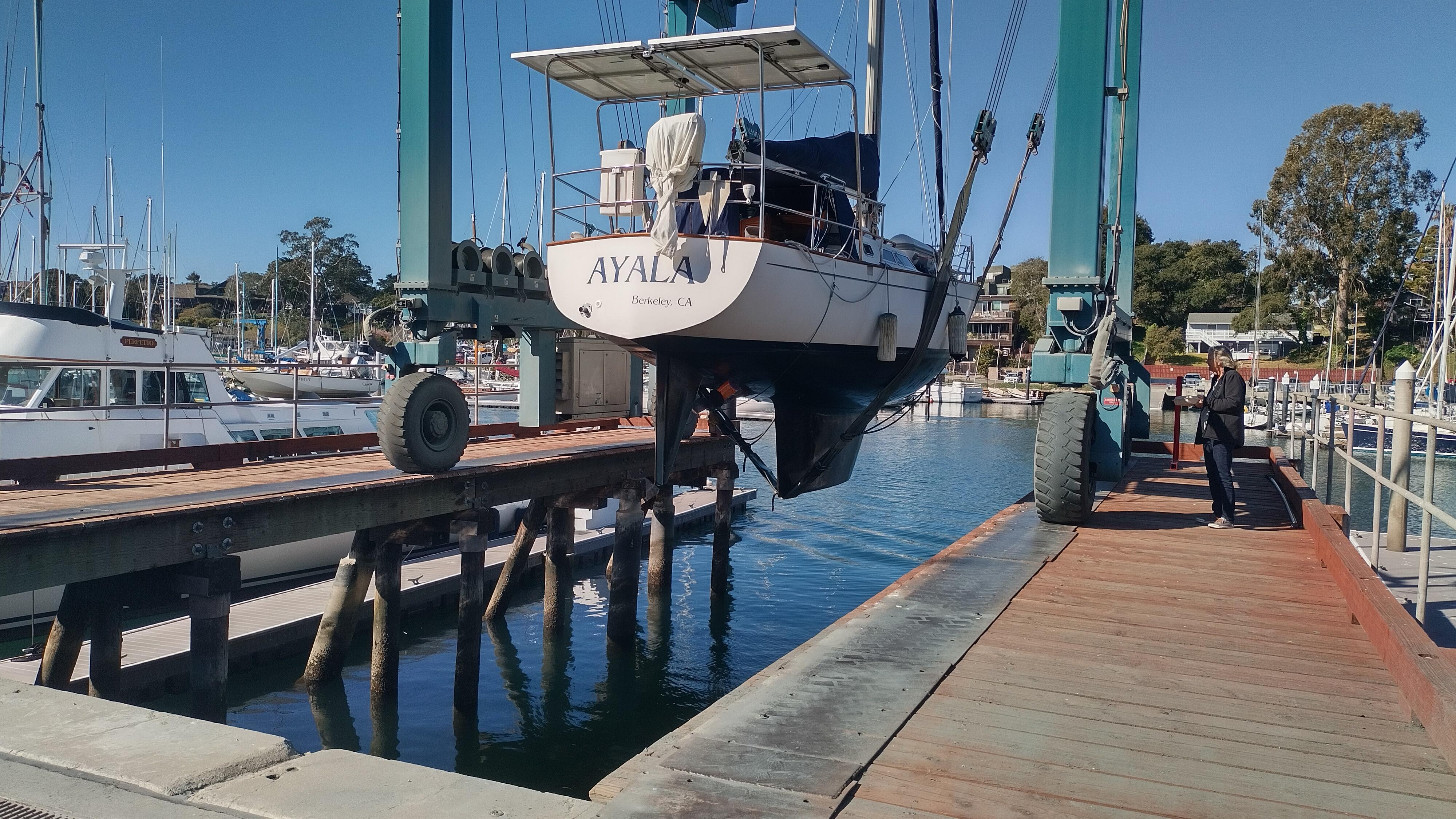 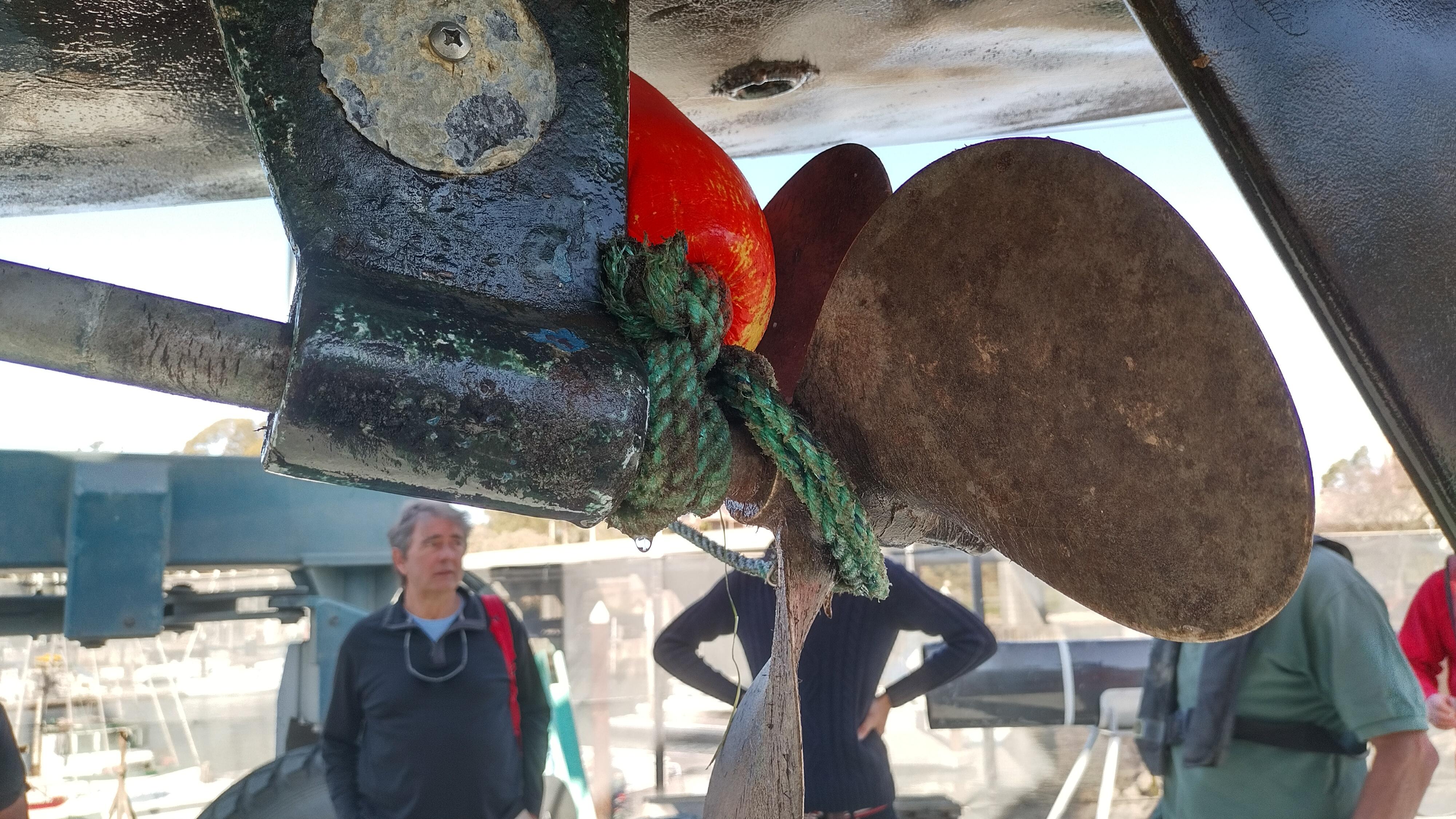 The yard was full, so we got sprayed off, changed our zincs, removed the crab pot, and inspected the prop shaft for damage. The cutlass bearing was obviously damaged (loose), and would need to be addressed before a full start to cruising.

With our cutlass bearing thrashed, we started making plans for a more in-depth haul-out at Santa Cruz or Moss Landing. The lovely folks at Elkhorn Yacht Club offered us space at their guest dock, so we put our bikes on board and headed southeast.

Leaving the harbor, the motor was making an odd thumping noise any time we got above 14kw (only 70% of capacity). We attempted diagnosis in motion, but had enough wind that eventually we just focused on enjoying the sail and turned off the motor. 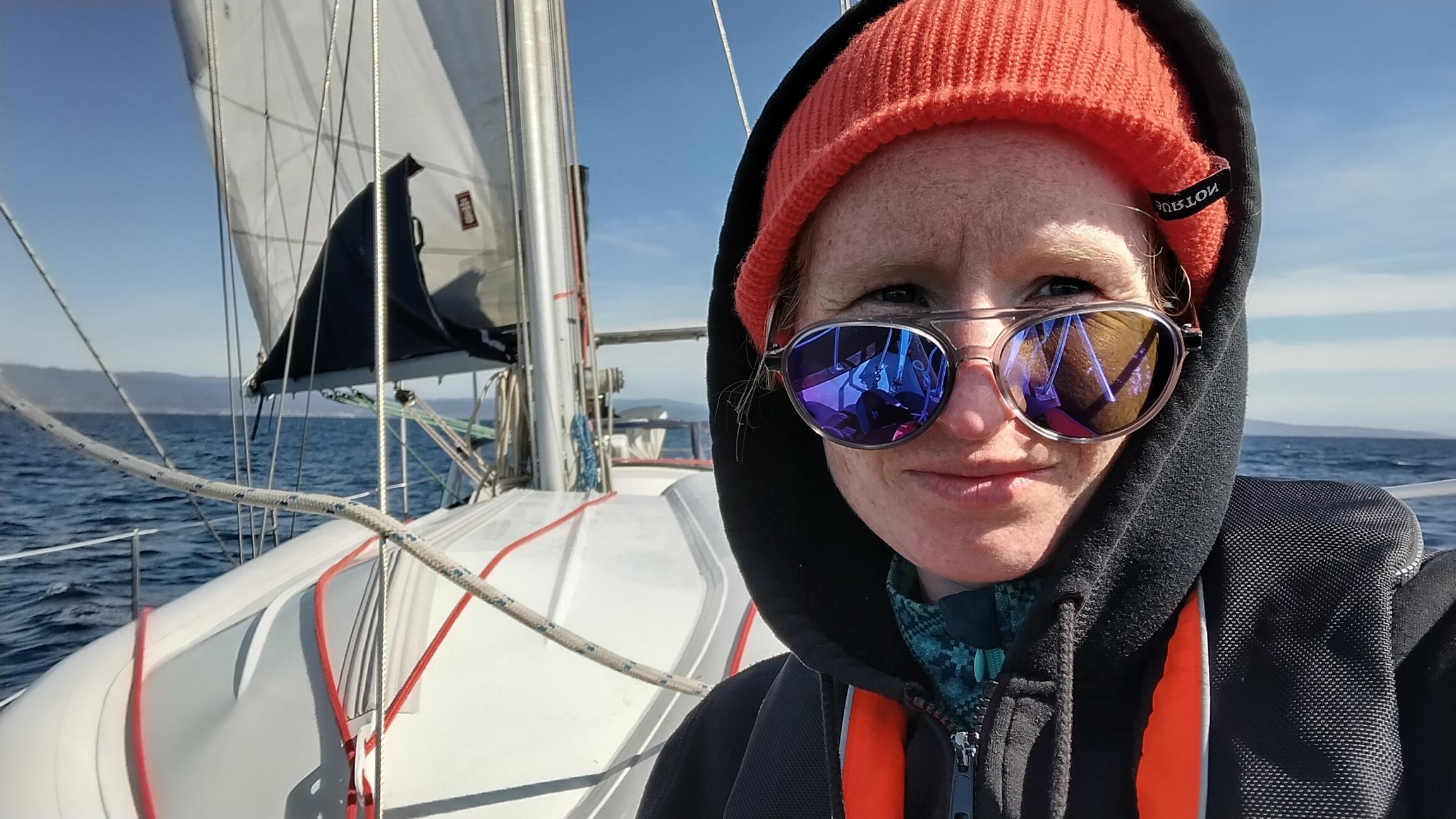 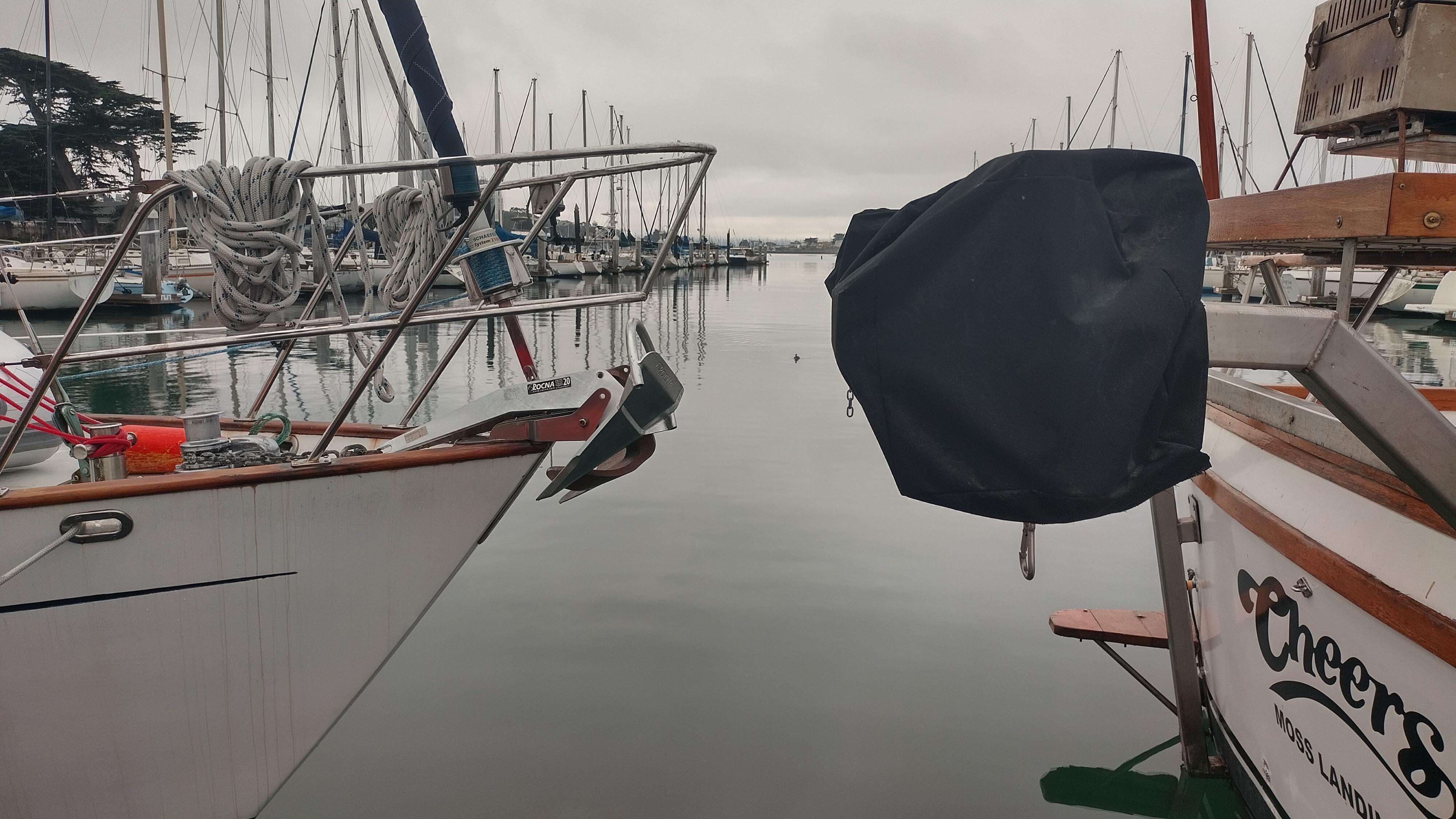 Crab pots were everywhere, and I was still mildly traumatized from our recent catch, so it was a relief to be pulling up to the dock – even with how tight it was! When all the lines were set, we had about 4 inches fore and aft before rubbing up against neighbors – but the EYC port captain really knows his margins. EYC was so welcoming, and a beautiful spot, and we really enjoyed our time there.

Over the next week, the weather was right for exterior wood work, so we stripped the toe rail and hand rails completely of their old varnish, and started the process of restoring from bare wood this time. Every inch was thoroughly heat-stripped, sanded smooth, and sealed with two applications of Smith’s penetrating epoxy just in time for our haul-out.

The yard manager, Andrew, asked us to keep this a secret, but Moss Landing Boat Works was hands-down the best yard I have been to in a long time. That said, they are beyond busy, so it’s not a well-kept secret! We were the only sailboat out of the water the whole time we were there (start of salmon season helped with that), but they were well-resourced, professional, honest, friendly, and competent as hell. 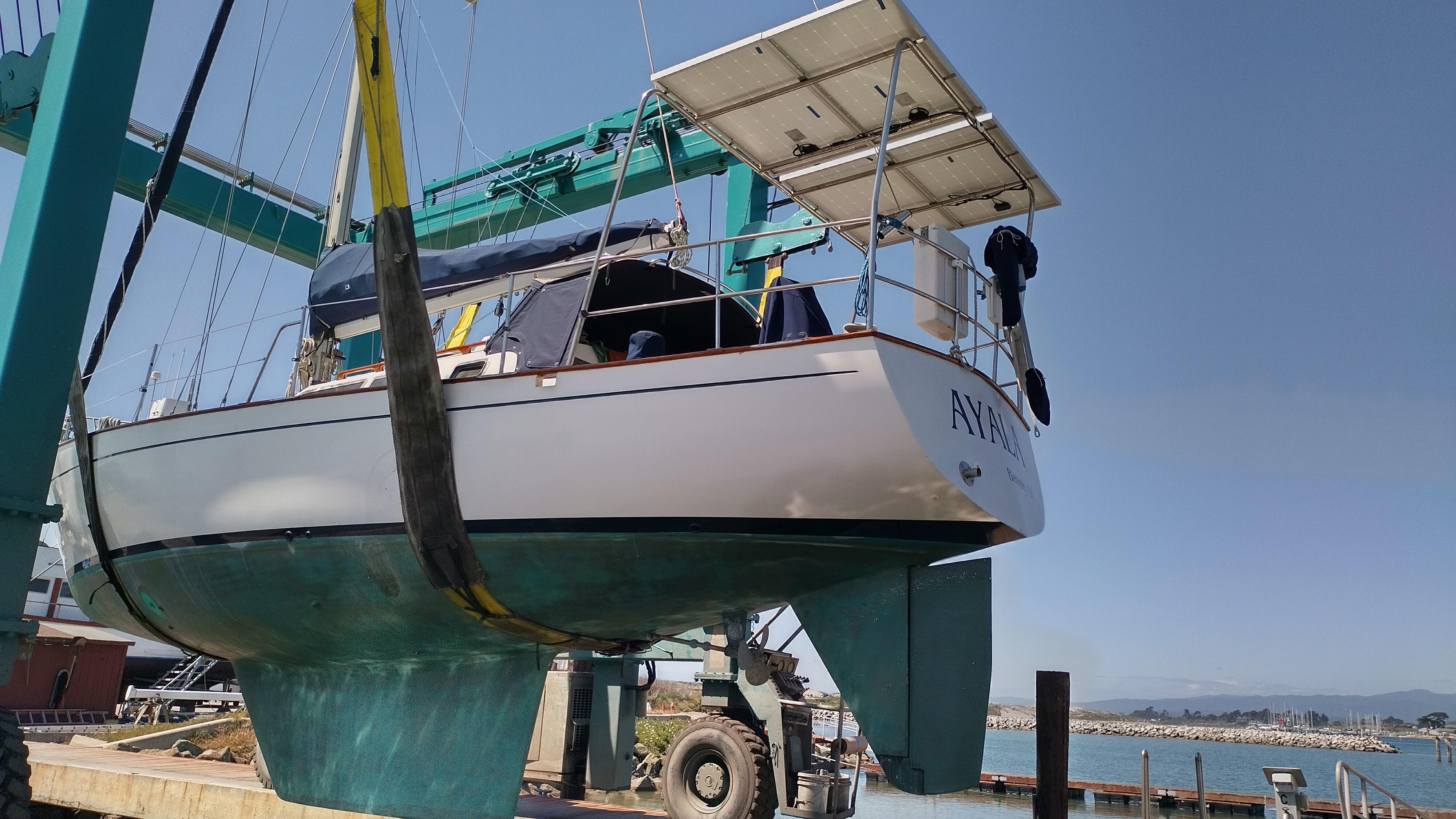 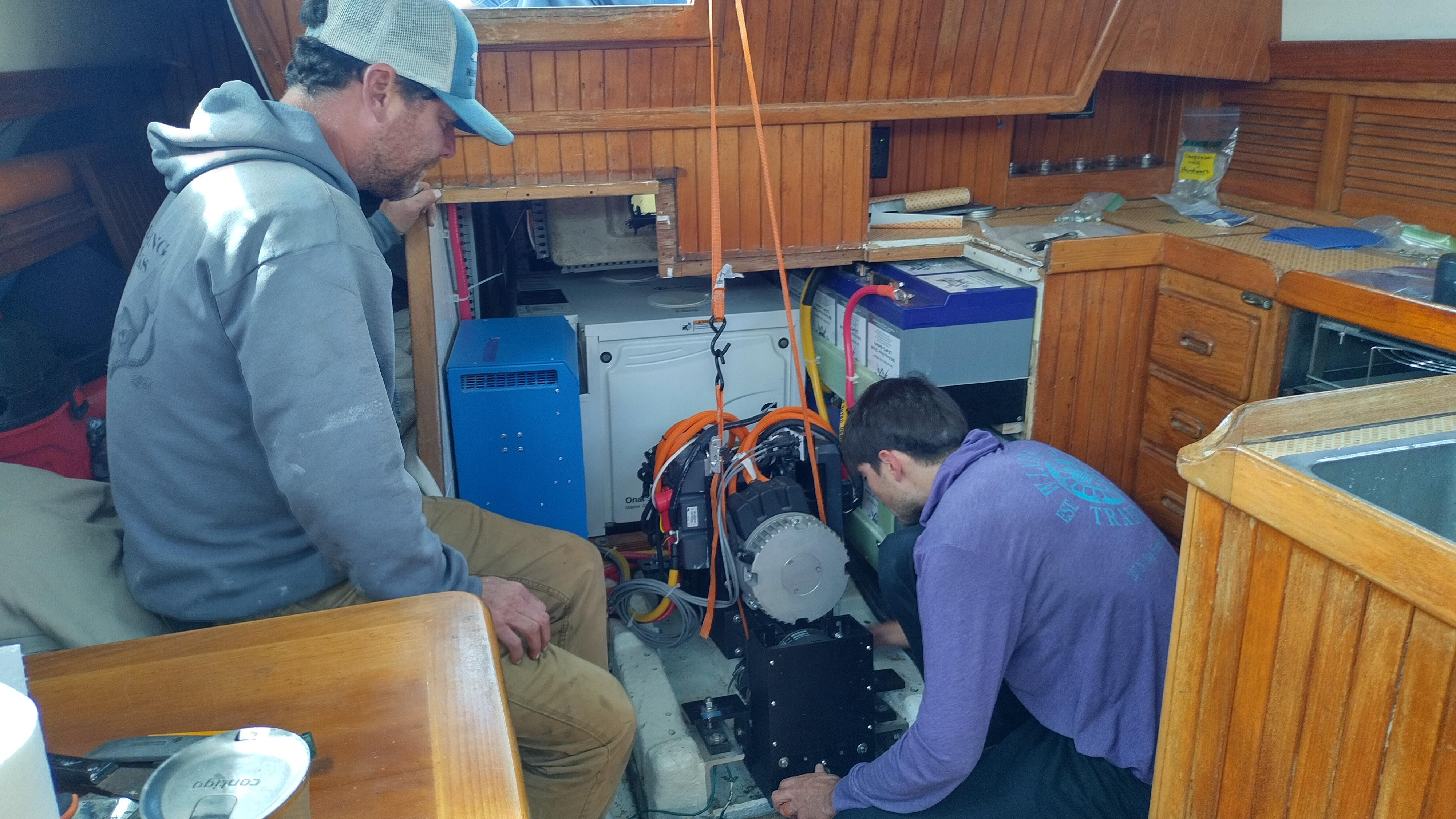 We inspected through-hulls and replaced one, finished our varnish job on the toe rails and hand rails, got a new dodger from the ladies at Custom Marine Covers (no website but great work & friendly multi-generational local business), replaced the cutlass bearing, buffed the hull, and re-aligned the motor. 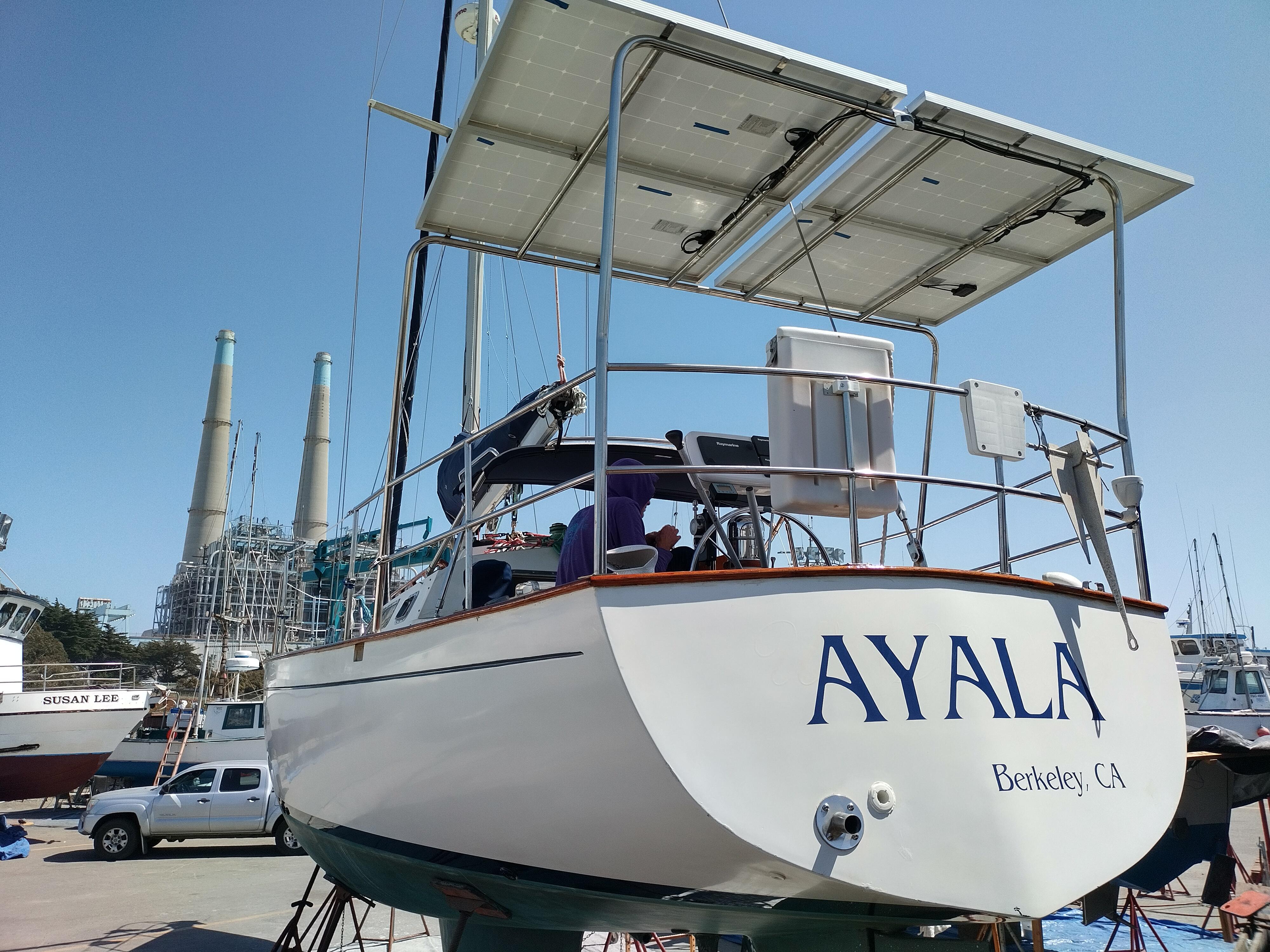 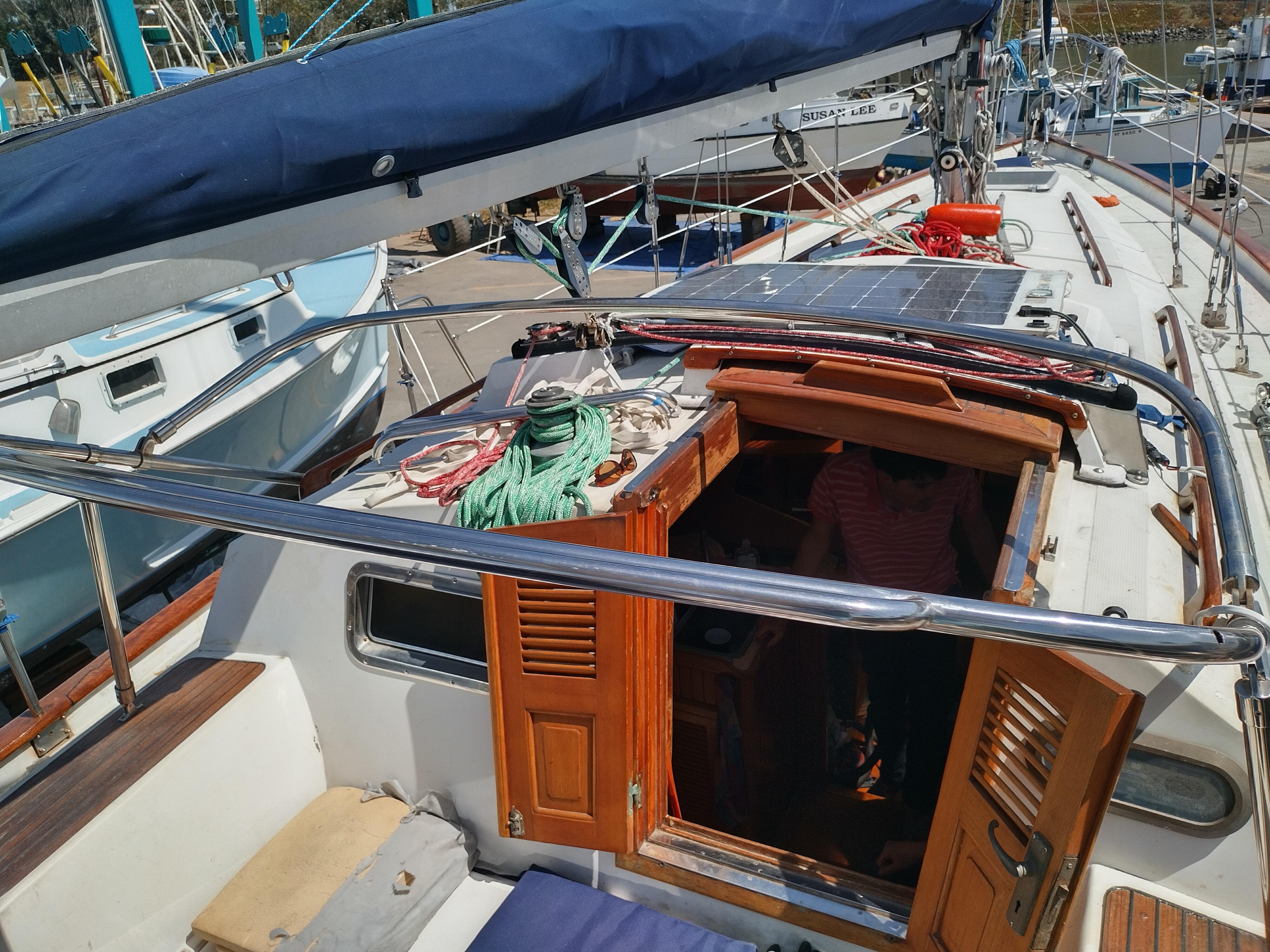 After we went in the water, it was clear that the motor knocking was made better by replacing the cutlass bearing & realigning the motor, but the issue still persisted. We spent a few hours on the dock diagnosing (how many kW makes it knock in forward? reverse? change the polarity? isolate the motors? etc.), determined the cause was a loosened belt, and hoisted up the motor until it was tight enough, then tightened the bolts into place. It can be so alarming to have problems like that (especially potentially expensive problems on new equipment!), but we got a lot of hands-on experience with all parts of the motor. 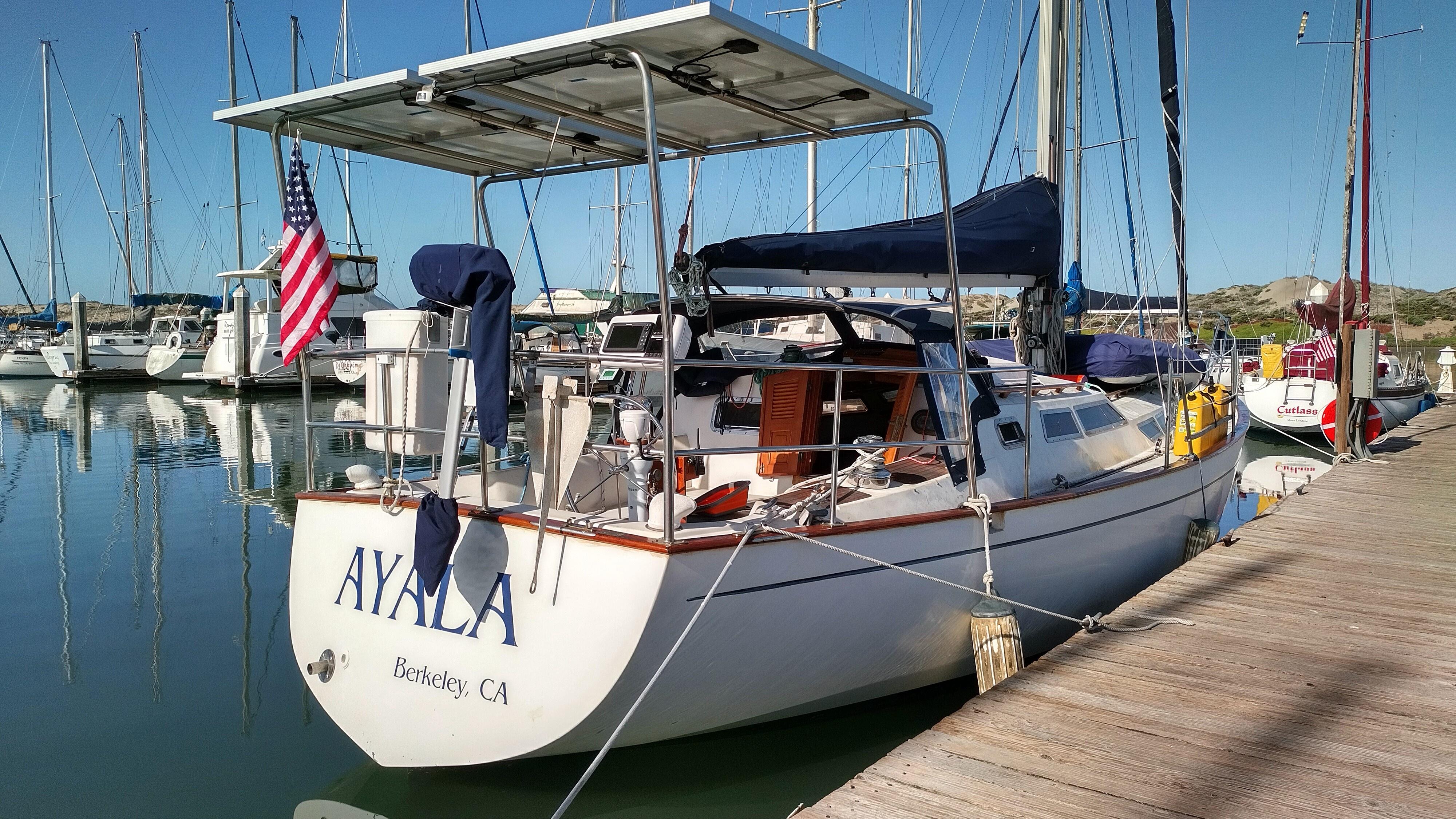 A brief weather window – with decent conditions for a few hours – opened up quickly, giving us the opportunity to get to the Monterey anchorage in about 6 hours.

The trip was gorgeous, but very choppy with big swells (6-10 feet) and wind waves (2-4 feet) in disagreeing directions. Fair Weather Mariners are great in rough conditions, not the quickest hull, but it remains super comfortable. Whales were everywhere, we sailed into Spout City, and some got quite close. The best moment was a humpback breached and spun right in front of us – just far enough away that it was exciting, not frightening. 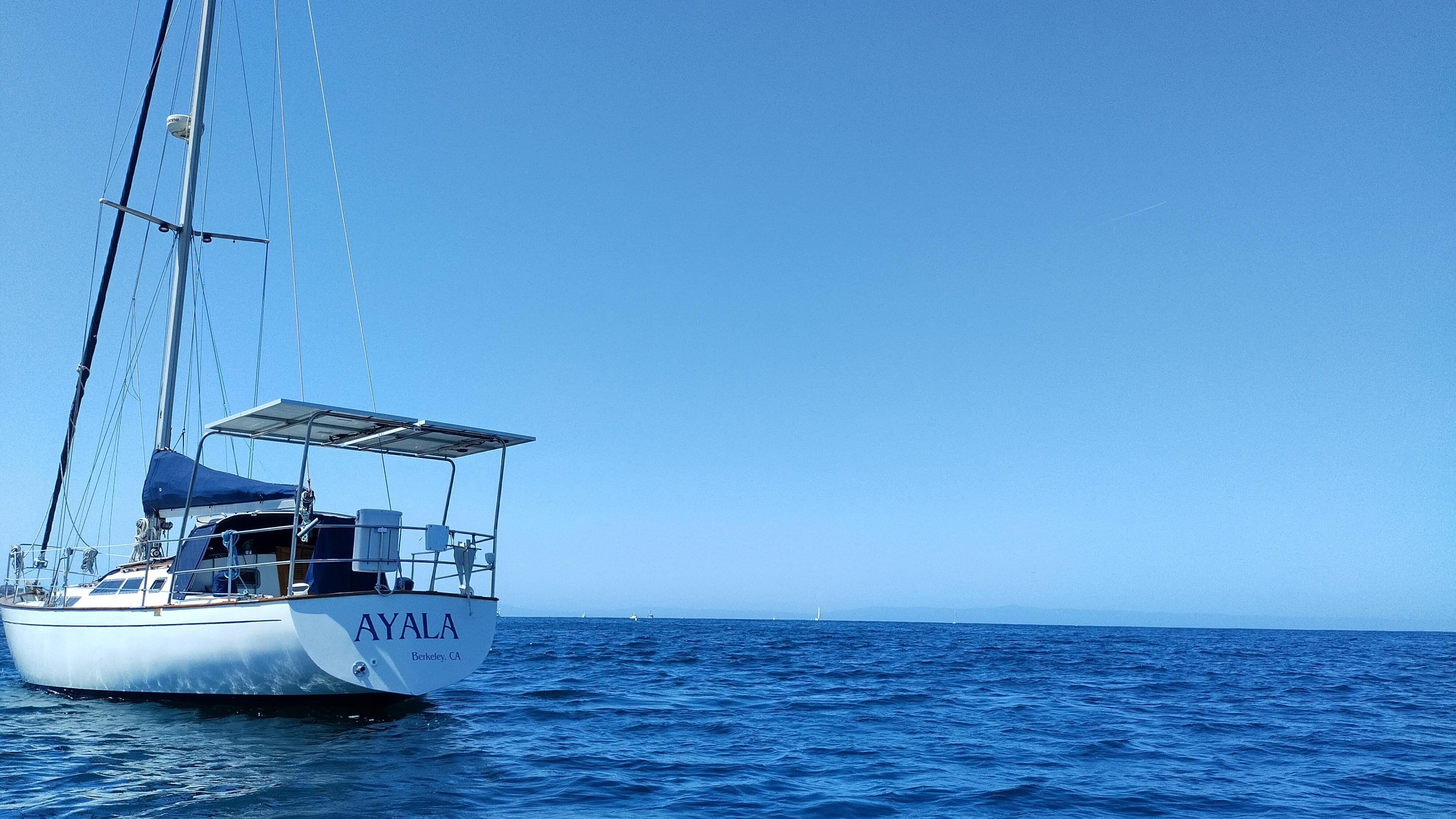 I have always loved visiting Monterey, and it was true by boat as well. Lots of lovely wildlife around, including some very tiny and chattery birds, and a quick dinghy ride to shore under the wharf. The folks at the Monterey Peninsula Yacht Club were very welcoming, and it left the impression of a very active club with plenty of serious cruisers with many miles under their belts!

Monterey is beautiful, no question, but the anchorage was rough. Fairly close to shore, near to a mooring field (where you cannot spend the night on a moored boat), and remarkably unprotected. The wind was high, the waves were large, and we were absolutely getting tossed around before we rigged a snubber. I think I got my sea legs in that anchorage.